We just received a copy of the Lost Encyclopaedia, so this seems like a good time to bring up again how much we admire this TV series. It’s popular culture at its best. We make the distinction of popular culture because some people say the series wasn’t as good as The Sopranos or Mad Men. We agree. But these two series were broadcast on specialty channels and were aimed at a more specific audience. Lost was broadcast on a major network, which imposed certain restrictions on the series. But those restrictions didn’t stop the two executive producers from making their narrative as complex as it was, which also made it denser and richer. They managed to balance emotion and action. They included all kinds of references into their stories without beating us over the head with them. We’re not saying it was perfect, and only time will tell if it will age well, but for now, let’s call it excellent scriptwriting. 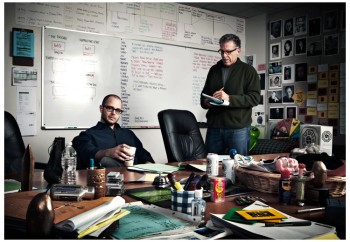